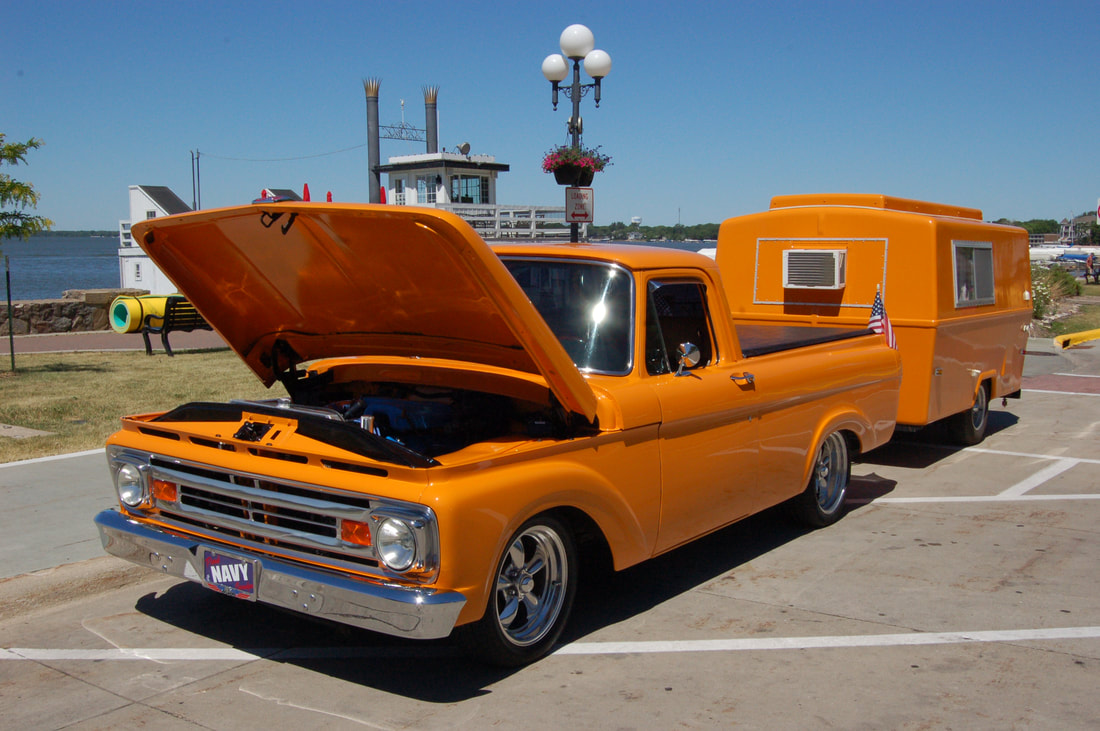 The club officially started in 1976 when Chuck Butler, Bruce Larson, Kenny McKnight and Larry Vagt went on the first Run for a picnic at the Anoka weigh station and rest stop on Highway 10.  The turnout was great with three panels and four Pickups; some of which later joined the club.  Two of these families were the Hutfles and Kuehl families.

In 1978 things began to really start rolling.  In September 1978, the first annual Fall Picnic was held at Como Park, with eight F-100’s and six family rigs attending.  The first newsletter came out in December of that year.  It was called the Pickup and Delivery.  At this point, it was decided to try to have only one meeting each year.  In January 1979, the kickoff meeting was held at John Aenesson’s Upholstery Shop in Bloomington, MN.  Dues were set at $5.00 to defer the cost of the newsletter.

In June 1979, we had ten trucks at the “Back to the 50’s Weekend Bash”.  In July, we co-hosted the “Commercial Caravan” with the Delivery Guys.  The second Fall Picnic was again held at Como Park and this time thirteen trucks attended.

In February 1980, we had a kickoff potluck and meeting at the Vagt’s house.  It was decided at this time to order window stickers to help promote the club.  In September, we held the Third Annual Fall Picnic at Como Park.  In December, the First Annual Christmas Party was held at the Kuehl’s.

In February 1981, we held our first Winter Banquet at the Blue Fox Inn at Arden Hills, MN.  Later that month six F-100’s made up a club display at the ISCA Show at the Minnesota State Fair Grounds.  In April, we had our first Spring Picnic and in May, we hosted a Run to Totem Town, a county school for boys.  In June we co-hosted the First Annual Iowa/Minnesota Campout in Mason City, Iowa.  We also held a Mystery Run that was attended by fourteen trucks.  The final run for the year was the Annual Fall Picnic at the new zoo.  The final event for the year was the Second Annual Christmas Party at the Kuehl’s house.

In 1982 and every year since we get together for the following events:
In addition to these annual events, members get together at the Annual MSRA Back to the Fifties, 50’s Summer Nationals, Back to the Sixties, St. Cloud Show and Swap Meet, Jesse James Days at Northfield, MN and many other occasions.  The club has always been and always will be a family oriented organization.

In recent years, many of our members have gotten together to help others in several different ways.  Once instance was a young man who was building a F-100 Pickup when he found out that he only had a short time to live.  The Twin City F-100 Club and Make-A-Wish Foundation combined efforts and finished the truck for him.  Club members spent 33 straight days working on the truck and it was worth it when Brad was able to ride home from the hospital in his truck.  This trip ended up being his last trip home before he died.  His Dad said that on the ride home, Brad smiled for the first time in months.  This pulling together to help Brad and the annual Saturday providing a change of pace for the boys at Totem Town are our way of sharing what our club has built over the years with others.
Powered by